This time of year, many of us have a nativity scene in our homes. They commonly include the Three Kings, also known as Wise Men or Magi, who came to honour Christ after his birth. These Kings are often dressed in long oriental robes and turbans. What is less commonly known, is that such a look in the previous centuries was sometimes associated with Polish dress. This can be exemplified by a gable stone showing a ‘Pool’, which is dated 1688, and which adorns a building on the Kerkstraat 322 in Amsterdam.

During the sixteenth century, Polish male fashion became increasingly influenced by Persian and Ottoman examples, leading Polish noblemen to wear colourful leather boots with heels, a kontusz (a coat or outer kaftan), a ferezja or delia (different types of cloaks), worn over a long-sleeved żupan (a tunic), and a kołpak (a hat often embellished with fur and feathers). Dutch artists and artisans subsequently produced multiple images of ‘typical’ Polish nobles, for example in books, on maps, and… on gable stones. To Dutch eyes, however, Polish dress differed very little – if at all – from other Eastern fashion: Polish figures were also used to represent Hungarians, for example. Similarly, Polish figures were sometimes indistinguishable from Ottomans. 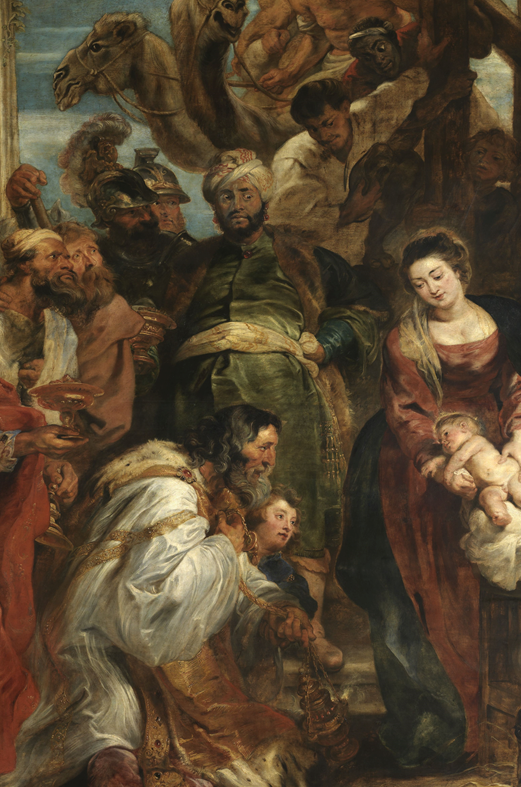 This is why the ‘Pool’ on the gable stone in Amsterdam looks the way he does. His clothing – which even includes a turban – and his posture are reminiscent of a man in a print by the Dutch engraver Lucas Vorsterman, after the Adoration of the Magi by the famed painter Peter Paul Rubens, a painting from 1621. Rubens in turn based himself on Italian illustrations. It is likely that the gable stone’s maker referred to the same pictorial tradition. This is how the ‘Pool’ on the gable stone in Amsterdam is related to nativity scenes.

Interestingly, the French diplomat Charles Ogier, who visited Poland in the 1630s, likewise associated Polish fashion with the Three Kings. Describing a host of Polish nobles, he compared them to “the Eastern Magi, who came to honour the Infant Jesus with a large measure of display.”

*I originally wrote this post for the social media outlets of the Dutch Embassy in Poland. This was post no. 24.

Last week, it was announced that the Rijksmuseum in Amsterdam – with financial aid from the Dutch state and several institutions – intends to buy ‘The Standard Bearer’, a painting by Rembrandt from 1636. Such standard bearers were high-placed members of town militias, not necessarily soldiers. Still, the painting offers an opportunity to reflect on a little-known aspect of Dutch-Polish historical relations: Polish soldiers in the seventeenth-century Dutch army. A travel account by the Pole Sebastian Gawarecki, written during the 1640s, discusses his stay in the Northern Netherlands alongside Marek and Jan Sobieski – the later king of Poland. On 16 May 1646, in the town of Bergen op Zoom, Gawarecki and the Sobieski brothers met “a Pole from Warsaw, who for some years now serves in the Dutch army as a standard bearer, and whom our Polish king [Władysław IV Waza] keeps in Holland at his own expense.” It is unknown who this Polish standard bearer was, but it was not unheard of for Poles to fight in the Dutch army, even if they were Catholics.

The Eighty Years’ War, fought between the Dutch and Spanish, brought about a large-scale modernization in the art of warfare. During much of the seventeenth century, and until the 1648 Peace of Münster in particular, the young Dutch Republic in Polish eyes formed one of the greatest military powers on the continent. The ongoing war attracted vast numbers of young men from across the continent, who wished to study the Dutch art of war, either by observation or by participation. Many nobles from the Polish-Lithuanian Commonwealth studied fortification and artillery at Dutch universities and academies, visited fortresses and army encampments, or enlisted in the Dutch army themselves. Several months ago, we already discussed one famous example: Krzysztof Arciszewski, who made a career in the Dutch West-India Company. Arciszewski’s choice to join the Dutch army is relatively unsurprising, since he was a Protestant. Catholics could join the Dutch ranks as well, however. Despite his Catholic upbringing, the Pole Władysław Konstanty Wituski fought alongside Arciszewski in Brazil, for instance, and the Catholic Lithuanian nobleman Krzysztof Zygmunt Pac served in the Dutch forces as well. It is not unthinkable, therefore, that the Catholic king Władysław IV Waza indeed paid for the upkeep of a Polish standard bearer in the Dutch army.

*I originally wrote this post for the social media outlets of the Dutch Embassy in Poland. This was post no. 23.